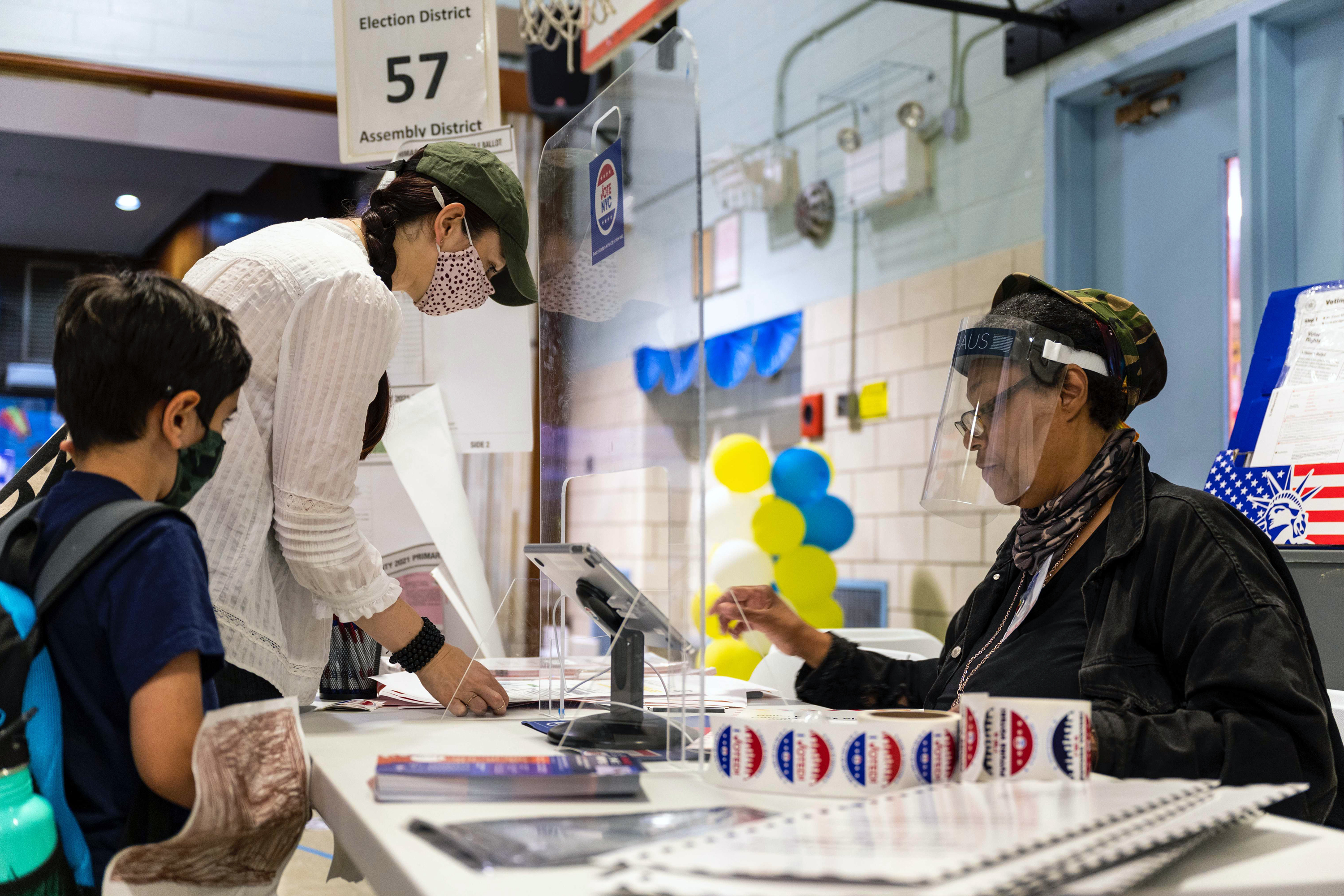 This article was originally published
by The City on June 28 at 11:17 a.m. EST
BY ANN CHOI AND JOSEFA VELASQUEZ

At least 1 million New Yorkers — nearly three of ten registered voters — participated in the primary election, a far stronger showing than when the mayor’s job and most City Council seats were last up for grabs.

Board of Elections figures show about 27 percent of active Democrats submitted ballots that included the 13-way contest for mayor, whose outcome will remain unknown for weeks as the new ranked choice voting process unfolds. Where the most voters turned out for the 2021 primary This map shows where voters were likeliest to cast in-person or absentee ballots in 2021. Hover over a Council district to see the share of active registered voters who turned out. (click for details)

With races from City Council to mayor remain up in the air, turnout patterns suggested an ongoing AOC effect energizing voters in progressive pockets of Queens while some residents of areas hit hardest by COVID struggled to get to the polls, an analysis by THE CITY found.

Overall, nearly 850,000 New Yorkers, including 191,000 people who cast ballots at the polls during 10 days of early voting, voted on the June 22 primary day and another nearly 130,000 had returned absentee ballots as of Sunday.

In contrast, about 22 percent of Democrats and 13 percent of Republicans went to the polls for the primary in 2013, the most recent highly competitive citywide race. At the time, early voting was not yet available in New York, and voters had to provide a reason to seek absentee ballots. Roughly 700,000 New Yorkers cast ballots on primary day.

“There is an increase in the work of civic engagement that’s happening in the city right now. I think we can see that it is paying off,” said Wood. Not only were registered voters more likely to cast ballots this year — the city also has more of them than before. As THE CITY reported earlier this year, voter registration has surged since 2016, the year Donald Trump was elected president, even as the city’s population dipped slightly.

In addition, voters were able to get absentee ballots without question due to the pandemic, which set the stage for the most crucial citywide election in at least a generation.

In the initial count of first choices made by in-person voters, Brooklyn Borough President Eric Adams was in the lead with 31 percent of Democrats ranking him as their top pick, followed by Maya Wiley at 22 percent and Kathryn Garcia at 19 percent. A first round of rankings for all the municipal races is scheduled to take place on Tuesday, though final results aren’t expected until the week of July 12.

An analysis by THE CITY broken down by City Council district shows that Democratic voter participation swelled in some of the same areas that also saw the greatest increases in registration, including Astoria and Long Island City in Queens.

The analysis relied on 2013 Democratic voter turnout data provided by the Center for Urban Research at the City University of New York. Staten Island’s Democratic minority boosted its turnout significantly this year, though still voted at a rate far lower than the citywide average.

Long Island City-Sunnyside had 15 Democratic candidates vying for the District 26 Council seat, with multiple contenders recognized by local Rep. Alexandria Ocasio-Cortez for signing on to her Courage to Change PAC’s progressive agenda.

And we’ve got @tiffany_caban shaping up to be Astoria’s next City Council Member! 🏆 https://t.co/mab31klqEy

By contrast, some districts in Queens and Brooklyn, and the majority in the Bronx, saw fewer voters turn out in 2021 than in 2013, Board of Election figures show.

Many of these areas — including Corona in Queens and the southern Bronx — disproportionately suffered death, severe illness, economic hardship and dislocation during the pandemic.

Absentee ballots may alter the picture once the final count is in.

Wood said more needs to be done to reach all eligible voters — including some 2.2 million registered voters who did not participate in the primary.

“More emphasis on making it easier for people to get involved later in the game would be very helpful,” said Wood.