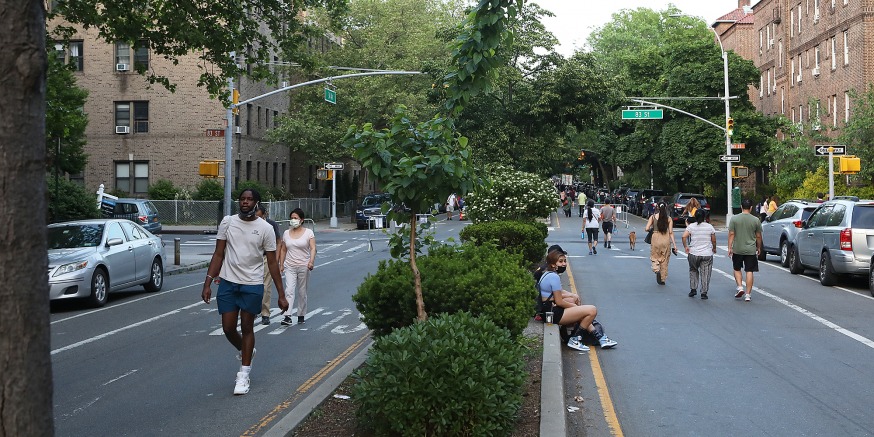 While one is advocating for 34th Avenue to be transformed into a permanent park, the other is seeking to reduce current restrictions on vehicle traffic.

About 1.3 miles of 34th Avenue – as well as other streets throughout the city – are part of the city’s Open Streets program, which closes roadways to through traffic for pedestrian and cyclist use.

In April, the City Council passed legislation to make the Open Streets program permanent, which the mayor signed into law May 13.

On 34th Avenue, traffic is now restricted – from 69th Street to 78th Street and from 78th to Junction Boulevard from 8 a.m. until 8 p.m. The setup, however, allows vehicles to use north- and south-bound streets that cross 34th Avenue. Traffic is permitted on north- and south-bound streets such as 77th Street (pictured) Photo: Christina Santucci

The city’s Department of Transportation (DOT) called 34th Avenue the “gold standard” of the Open Streets program in a news release announcing that it had installed its 1,000th bike rack last week.

The racks were being put in the roadway on 34th Avenue and at 81st Street. Other bike parking has also been set up on the Open Street at 69th Street and 77th Street at Travers Park, a spokesperson for the agency said.

But the bike racks highlighted a divergence in residents’ opinions about the Open Street and traffic on the roadway. Some residents are advocating for the Open Street to be shorter and say that it is detrimental to those who drive—including delivery workers.

In a statement, the DOT said, “We will continue to gather feedback that we will consider as we develop design proposals for the future of the corridor.” The agency said it plans to present its findings to the community in June.

Some Jackson Heights residents want the city to take the pedestrian and cyclist thoroughfare a step further – and are advocating for 34th Avenue to be made into a permanent park.

The group – Friends of 34th Avenue Linear Park – created a petition for their proposal, which as of Wednesday had received about 1,600 signatures, said volunteer Josefina Bahamondes.

“The benefits that the linear park can bring into the neighborhood are immense,” she said. Bahamondes, who is an early childhood teacher, explained that if 34th Avenue became a park it would allow kids more space to play, which would help their development.

She also praised the installation of the bike racks. Bahamondes said that the Friends are now focused on collecting more signatures and want to involve fellow community members in the planning and design process for the added green space.

“I’m crossing my fingers that this becomes a reality because it would change everyone’s lives in a wonderful way,” Bahamondes said.

Their petition states that the Friends also support: facilitating access for emergency vehicles, delivery, city services and school buses; accommodating people with disabilities, including Access-A-Ride; providing access to existing driveways and garages; and reducing conflict between pedestrians, cyclists, and motorists.

However, the avenue already has reduced vehicle access, according to another group of residents.

The group, called 34Compromise, said in a statement that the Open Street has made it more difficult for drivers, including delivery drivers dropping off homebound seniors, and has increased noise on the avenue.

“There are so many people and residents of the avenue that are not ok with the avenue as it is right now,” said Paola Peguero, a volunteer with the 34Compromise group. She also said she wished the bike racks on 81st Street had been installed on the sidewalk – instead of taking away two parking spaces.

The group started its own petition, which had more than 800 signatures as of Thursday morning.

The petition describes several adjustments that they believe “could make the situation better for everyone.”

Among these changes proposed are: a reduction to the length of the 34th Avenue Open Street, adjustments to the operating hours, designated areas for merchants; and suspension of traffic restrictions during inclement weather.

Peguero noted that the 34th Avenue Open Street is significantly longer than other roadways included in the program, and said that for residents of 78th Street – which is only accessible from 34th Avenue – the street closures are especially challenging.

The 34Compromise group is planning a march Saturday at 1:30 p.m. along 34th Avenue from Junction Boulevard to 69th Street. Peguero said organizers wanted to “show that we are a group that is looking for a middle ground – a compromise – and to inform our neighbors.”

On Wednesday evening, Julio Rosario, who was in Jackson Heights from out of town to visit family, said that the Open Street has been inconvenient for his relatives who drive.

“I’m visiting my uncle. I hear him complaining a lot. He wants the cars to have time to go through,” Rosario said. He added, though, that the current hours did allow people to park their vehicles in the evenings.

Rosario was among dozens of people walking, jogging and biking along 34th Avenue as temperatures topped 80 degrees.

Hong Khuc sought to reach her daily step goal, Greg LaCombe chatted on the phone with a friend and Laura Ramirez went on a stroll with her dog, Oliver.

Khuc said she walks daily between 70th and 91st Streets. “There are so many green trees on this avenue, so it’s really great.”

Meanwhile, Ramirez said she runs on 34th Avenue before work, and called the current Open Street setup “amazing.” She stopped to let Oliver play with Sabrina Felson’s pup, Hazel. Both women said they have met new friends while walking on 34th Avenue. Sabrina Felson with her dog Hazel stops to chat with Laura Ramirez and her dog Oliver (Photo: Christina Santucci)

Felson said she was a supporter of the linear park proposal and had already signed the Friends’ petition. Because of the Open Street, she has permitted her nine-year-old daughter to rollerblade with friends to nearby Travers Park – whereas she considered the trip too dangerous when full traffic was permitted.

“We need a park,” she said. “Everybody comes out and strolls in the nice weather.”

LaCombe, who moved into the area in August, said the Open Street was the best thing that has happened to the neighborhood since his arrival.

“When coronavirus was at its peak, this was my getaway,” he said. However, he favored keeping the setup as is – because “we barely have parking spots as it is.”

LaCombe also credited the 34th Avenue Open Street with helping to spread word-of-mouth about relief efforts following a fire in April that displaced more than 150 families. People on the avenue told others about clothing drives and collections for other supplies.

“It’s a great way to remind the community that we are still connected,” he said.

It is disgraceful that open streets followers would use the 89th street fire as any indication of how wonderful they think open streets is. Firemen were slowed down because of the street closure.

So many bicycle haters here in Queens. So many car lovers who don’t understand many people just want a safe place to walk, and NOT on the sidewalk. Cars have been taking over this city and its time we call get healthier. No more smoke, no more horns, no more road rage, sick of it. Car drivers are the WORST!!

Thats why guys like me are making alot more money renting out private parking spaces to people like you.

Wait until the 911 calls are inhibited by dogs lazing in the streets. The parades of bicycles and baby stroller traffic slowing down fire trucks and EMT’s. Wait till reality hits.

I’ve seen dogs getting ran over by speeding cyclists and children as well , motorcycle & dirt bikes are also speeding on 34ave . They should consider having traffic enforcement there during those hours that the avenue is closed.

It’s almost impossible to live in Jackson Heights now. I live on 34th by travers park and it’s become ridiculous. There’s so much noise all the time, music so loud, people yelling at 3am, the park never closes and 34th avenue has become a joke. I’m really looking into moving out of here.

How about a simple compromise. 34th Avenue has a divider in between. How about making the west bound lane a permanent closure and allow the Eastbound lane leading to the GCP and CitiField open to cars and other traffic. The traffic on Northern Blvd and 35th Avenue along with the incessant horn honking has become unbearable. I don’t see why this can’t be done. Once everyone goes back to work, the need for a WHOLE AVENUE to be closed during business hours will be completely unnecessary.