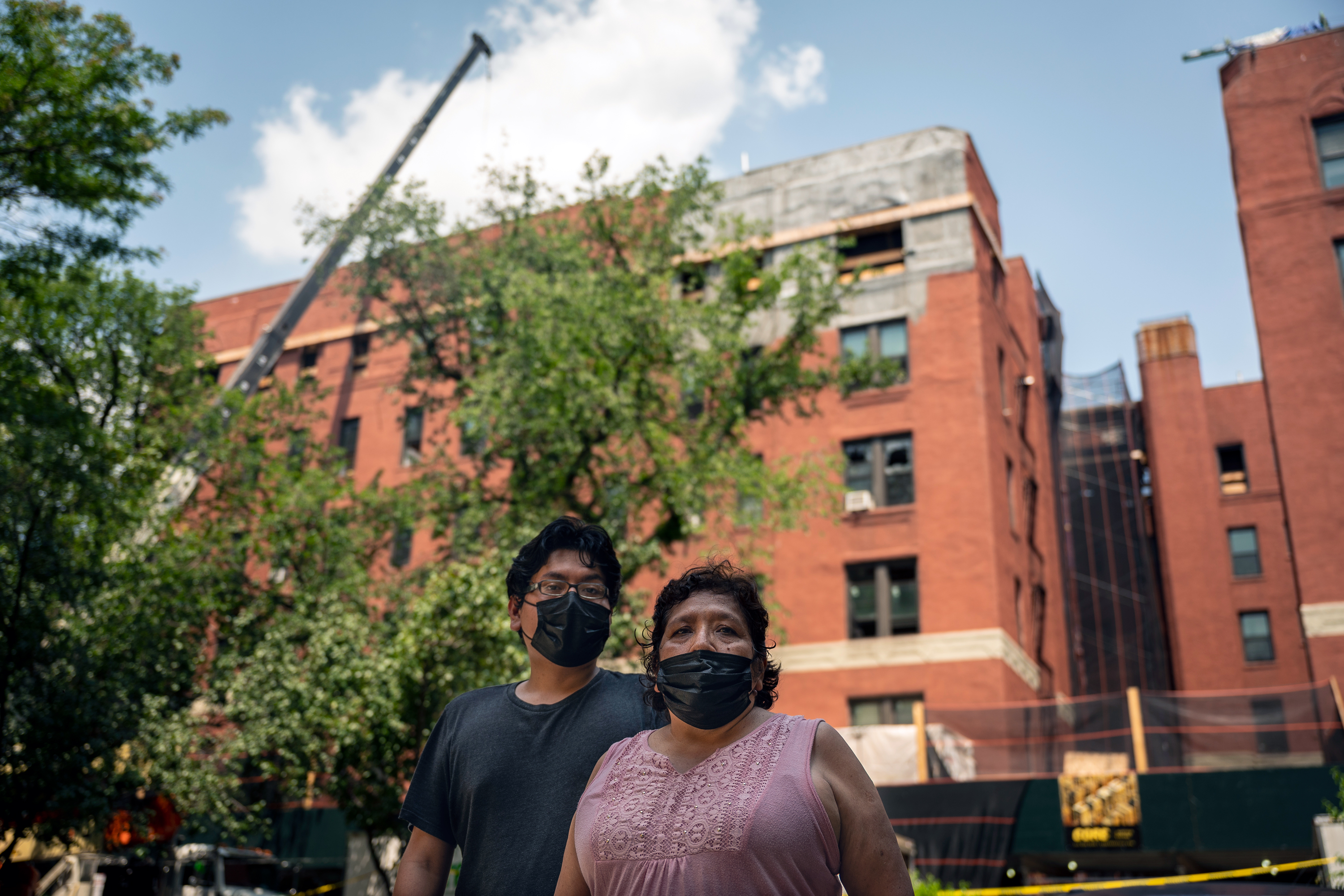 Stephen Hernandez, 28, and his mother Ofelia Orea, 63, lost their Jackson Heights home of over 20 years after a fire badly damaged their building (Hiram Alejandro Durán/THE CITY)

This article was originally published
by The CITY on JULY 20, 2021, 9:01PM EDT
BY Christine Chung

On a sunny day in early April, minutes before flames ignited across a 133-unit apartment building on 89th street in Jackson Heights, Andrew Sokolof Diaz returned home from a doctor’s appointment for his two-month-old son.

He opened the windows to get some fresh air, before leaving to take their dog out for a family stroll.

“So I remember opening the windows and feeling a little nostalgic, like aw, this is our little home. I actually remember that feeling,” said Sokolof Diaz, 33, a leader of the building’s tenant association. “And that’s it. The worst possible thing that could have happened, happened.”

Around 1 p.m., the electrical fire, which fire marshals said was sparked by an overloaded power strip, began burning on the top floor of one wing of the six-story, two-address building and spread rapidly, fanned by an apartment door left ajar.

Tenants scrambled outside, some exiting through the main entrance and others climbing down fire escapes, and watched the destruction from the sidewalk. Billowing plumes of smoke clouded the sky for blocks.

It took 12 hours for hundreds of firefighters to quell the eight-alarm blaze, which injured 21 people. Ultimately, the sprawling building’s more than 140 households — about 500 New Yorkers — were displaced from their homes. 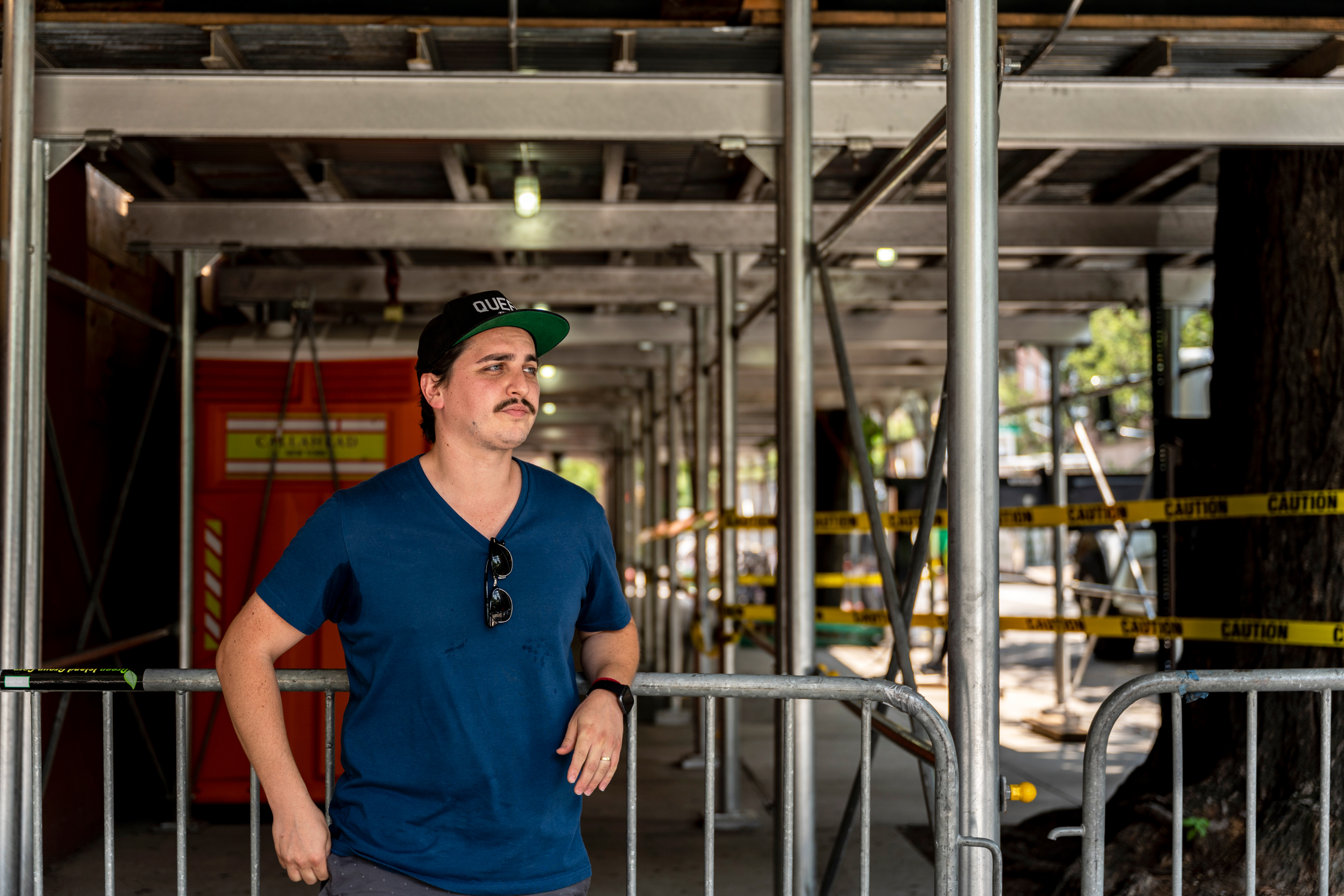 A season later, more than 100 residents of the rent-stabilized, block-long apartment building are without a permanent home. By the tenant association’s count, some 60 families remain in city-sponsored hotel rooms across Queens and Brooklyn, following Red Cross emergency relocation.

They were told they could stay for a month — two months ago.

‘We Basically Have Nothing’

After losing their homes and in many cases all their possessions, those former tenants are now confronting difficult choices on offer via the city’s affordable housing program. Some are being offered pricey new rentals in the neighborhood and others, apartments on the far side of the borough.

Meantime, displaced families told THE CITY, the Department of Housing Preservation and Development has attempted to relocate them from the hotel rooms to homeless shelters — first on Father’s Day and then again this month.

For families, that would mean leaving Queens entirely, since HPD doesn’t operate any emergency shelters for displaced people in the borough.

“We are just waiting to see what HPD and other organizations are going to do. I really do not want to go to a shelter,” said 16-year-old Kimberly Sinchi, who’s living in a hotel room in Downtown Brooklyn with her parents and her dog. 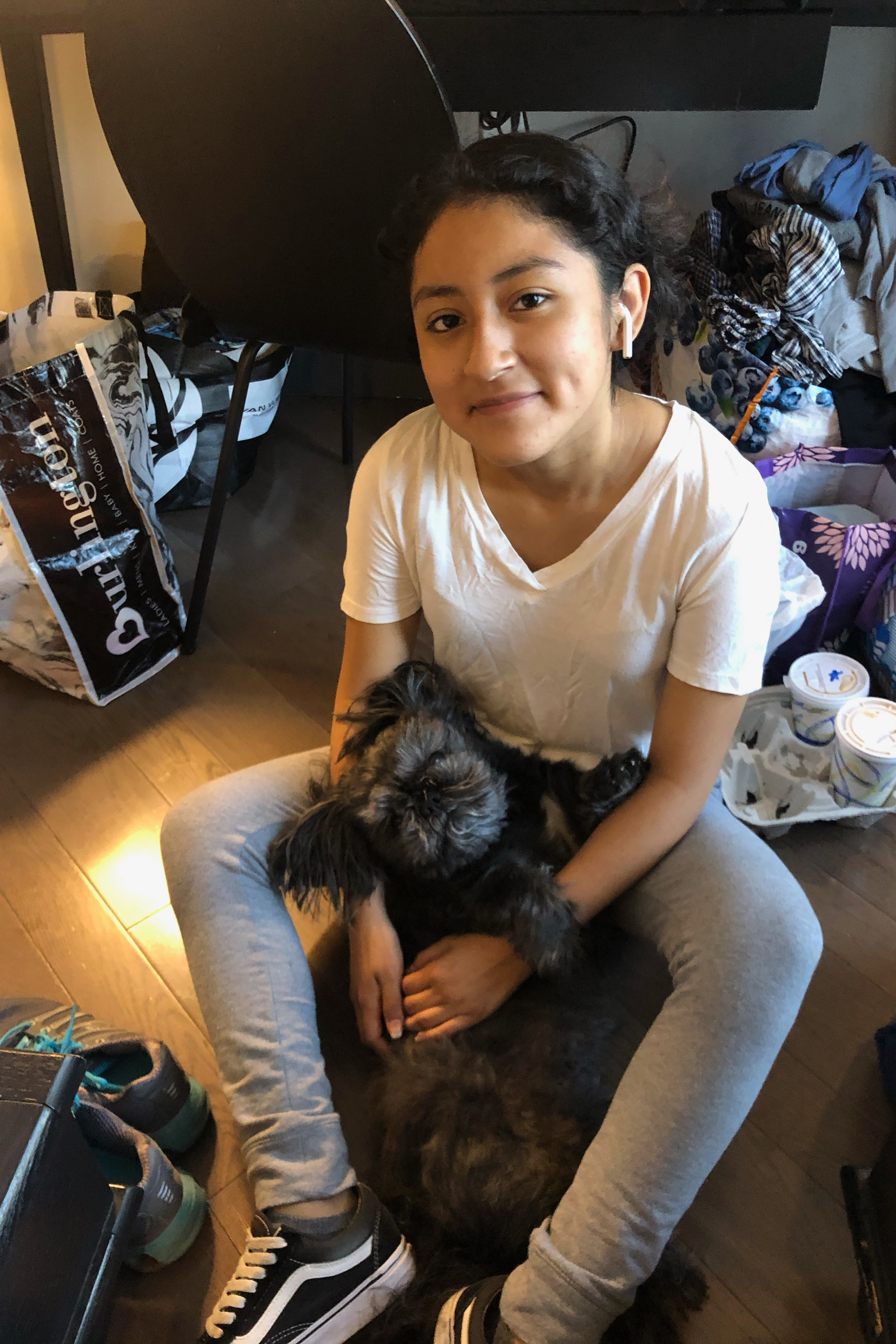 16-year old Kimberly Sinchi has been staying with her dog, Tango, and her parents at a hotel room in downtown Brooklyn after they were displaced by a fire from their Jackson Heights apartment. Courtesy of Kimberly Sinchi

She said her family is searching for affordable housing that wouldn’t further upend their lives and her education. She attends Benjamin Cardozo High School in Bayside, a long commute from the hotel. Their means are limited: her father works in construction and her mother cleans homes.

“I know for my parents it’s more difficult money wise,” she said. “We have to buy everything again, we weren’t able to get basically anything back. We basically have nothing besides donated clothes.”

A surge of fundraising and charitable aid in the fire’s immediate aftermath has given way to harsh reality: Finding new affordable housing in or near the popular neighborhood of Jackson Heights is nearly impossible.

A review last year by THE CITY found just 20 affordable apartments built in the local community district under Mayor Bill de Blasio’s housing program, with another 83 in neighboring Corona.

Some are returning to their longtime neighborhood only to pick up possessions spared destruction, scheduling visits via the property manager.

On a recent Friday morning, 27-year-old Steven Hernandez and his mother, Ofelia Orea, 64, stopped by the building to salvage their remaining belongings. Orea said deciding what to pack from their third-floor apartment — once shared with 10 other family members — spurred a surge of emotions.

“You want to take everything. After 30 years of living there, you have so many things there, so many memories and all of that, and you want to take it all with you,” Orea said in Spanish. “But there’s nowhere to take it.”

They are living month to month in a hotel near Kennedy Airport, and had just received a call that morning with news from an HPD caseworker: They’d been granted another month’s stay.

“Every time the extension has been short notice,” Hernandez said. “I don’t think the city was prepared to deal with a situation like this.”

Hernandez and his parents have been working with HPD to find affordable housing in Queens — and finding few options with their monthly income of $1,000. They’ve applied for a one- bedroom apartment at the Archer Green apartments in downtown Jamaica and await an answer.

“There were three generations living in the apartment, a lot of memories. Everytime I wake up at the hotel, I wonder, ‘How much longer it will be?’” he said. 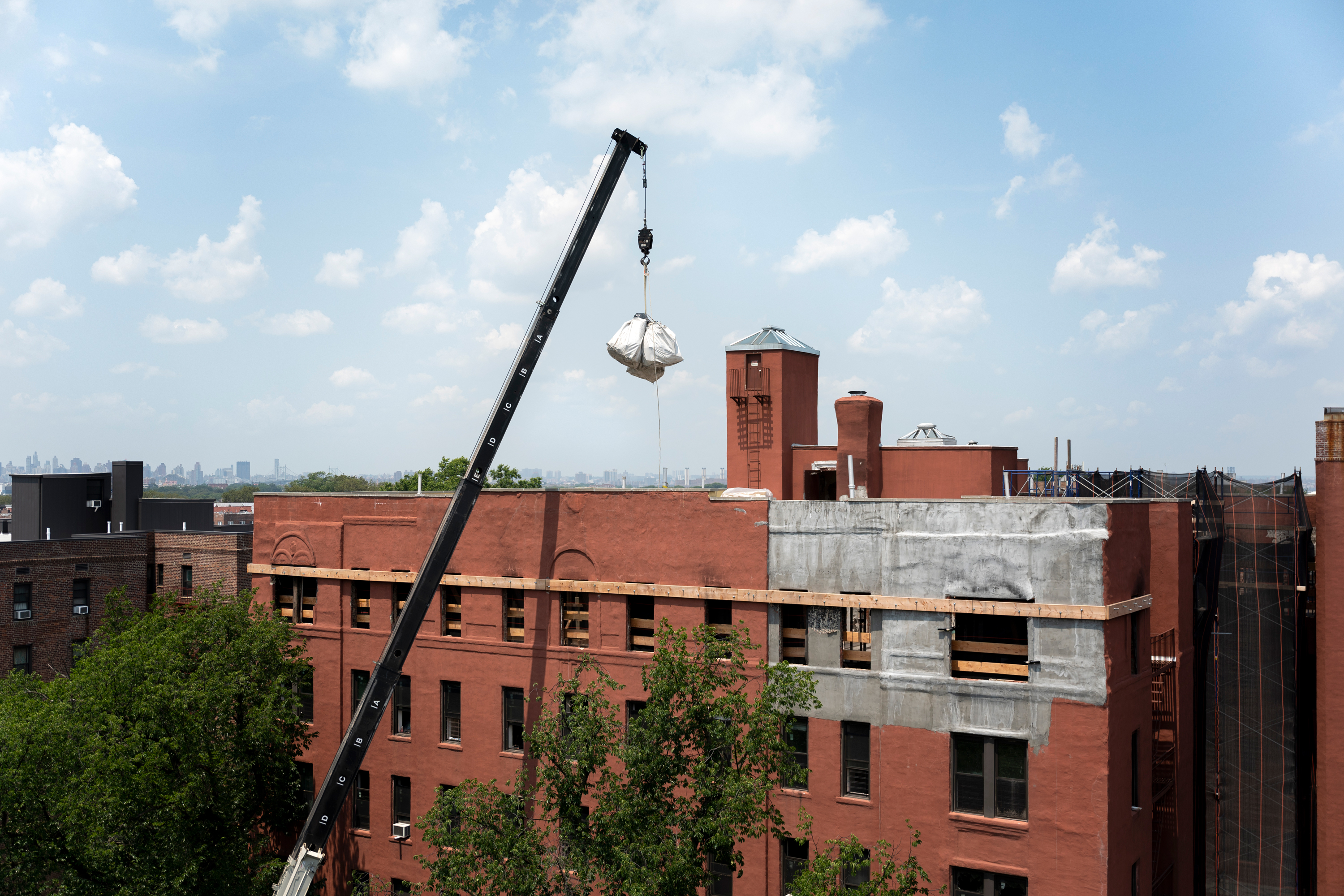 Hiram Alejandro Durán/THE CITY A crane removes bags containing trash and the unsalvageable belongings of displaced tenants through a hole in the roof.

Sokolof Diaz said he was dismayed by the housing options presented by HPD, in neighborhoods as remote as Far Rockaway. He said HPD encouraged his family to apply for an apartment with $2,000 monthly rent at the Roosevelt Parc Apartments in Jackson Heights, greatly exceeding what they paid for their one-bedroom on 89th street.

“Our tenants were paying as low as $600 rents, very affordable rents,” he said. “The areas they’re referring us to, that’s not our enclave, that’s not our community…. It’s not what the tenants deserve. These are working people who rely on friends, family for child care. The school logistics, work logistics, it all just doesn’t work.”

Jeremy House, an HPD spokesperson, said that the agency was “happy that many families have already found new homes.” He added that displaced tenants “cooperating with the housing application process and accepting of HPD’s housing support will continue to be offered hotel extensions.”

No families have yet obtained permanent affordable housing through HPD, though some are in “various stages” of the application process, House said.

The tenant association has enlisted local elected officials, including state Sen. Jessica Ramos (D-Queens) and state Assemblymember Jessica González-Rojas, to advocate for temporary housing and, ultimately, a return to their homes on 89th Street.

González-Rojas said the electeds remain committed to “really pushing the city to provide that compassionate response, understanding their lives have been completely upended.” She contends the city should be providing tenants with more timely updates about their hotel stays.

The building is currently undergoing asbestos abatement along with repairs for fire and water damage, with no word to tenants about when they can move back in. A FDNY investigation of the blaze is still ongoing, a department spokesperson confirmed.

Hernandez and Orea said they are apprehensive about their possible move to an apartment in Jamaica, a long, multi-leg transit ride from Jackson Heights.

Orea misses her community, being surrounded by her loved ones and greeting neighbors. Living there was both tranquil and social, she said. Many of those she knew in the building hailed from the same small town in Jalisco, Mexico, where she grew up.

The separation of her family has been especially hard on Orea, whose children and their own families lived with her — a total of 12 family members. Each of those families is now dispersed in emergency hotels.

“My granddaughter was born there, in that apartment, and now everyone is going their separate ways. We won’t, we’re not going to be together anymore,” Orea said. “The strength that I have comes from the dream of returning to our apartment. That’s what gives me strength. We won’t give up.”