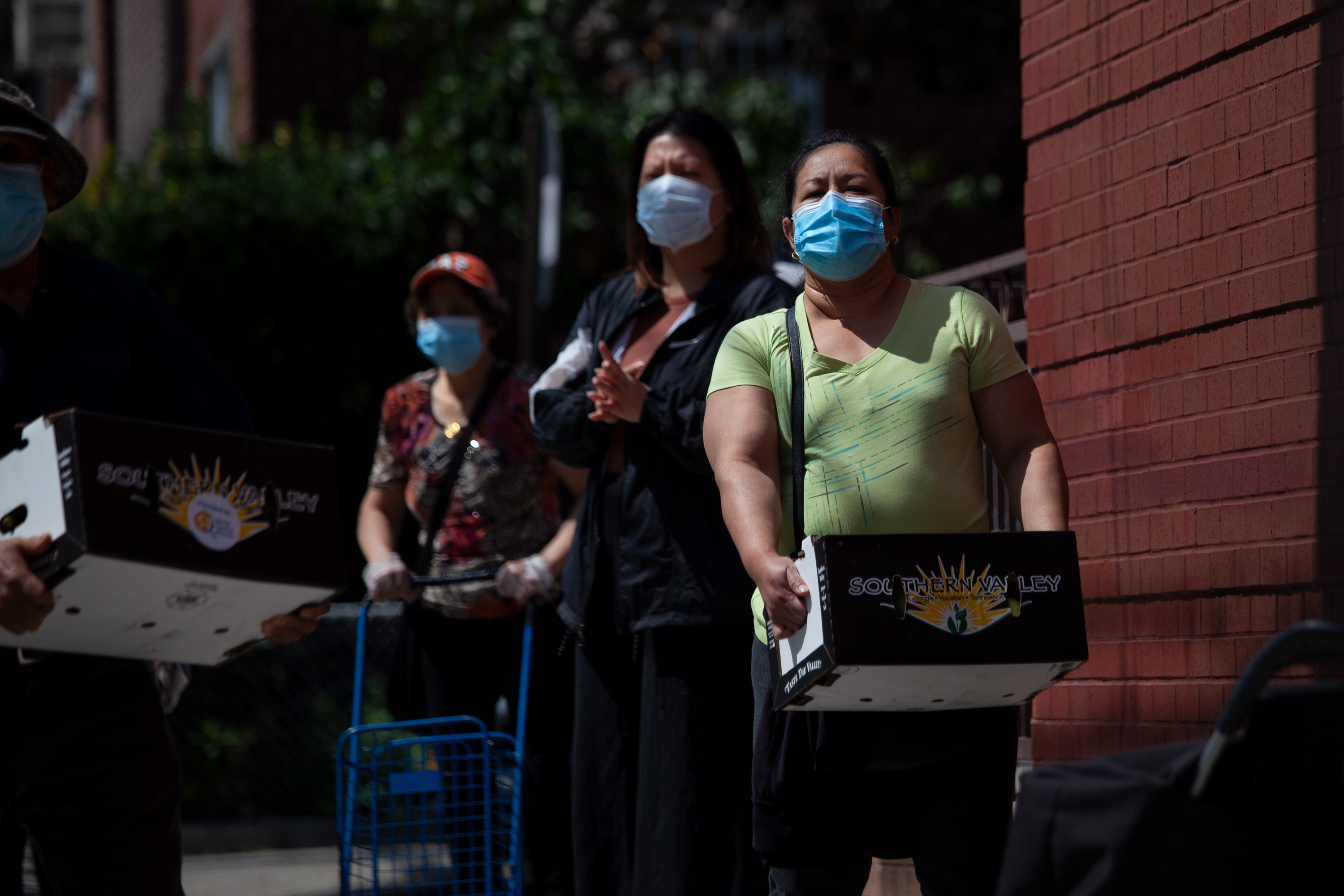 By Josefa Velasquez, THE CITY
This story was originally published on 9/8/20 by THE CITY

Nearly six months after COVID-19’s spread caused a statewide shutdown, life in New York City is showing signs of slowly reverting back to pre-pandemic normalcy for some.

Retail stores are open again, diners can eat at restaurants, albeit outside, toilet paper is back on the shelves and baseball is on TV.

But in Corona, Queens, recovery from the pandemic poses a unique set of challenges to the largely immigrant, working-class neighborhood, which was the early epicenter of the virus’ outbreak in New York.

Even as new coronavirus infections and related deaths have reached new lows in the five boroughs, the effects of the pandemic are still in full view in Corona, whose zip code has had the highest number of COVID-19 cases of any in the city, with 5,121 reported as of Tuesday, according to city health data.

A large swath of the roughly 112,000 people who live in Corona — 64% — are foreign-born, according to census data, and an estimated several thousand are undocumented.

That shuts them out of most public assistance — including food stamps, unemployment insurance, rental and cash assistance and the federal government’s stimulus checks — because of their immigration status. Many have been left to rely on a combination of private organizations and their communities for help — from finding food to work.

Valentín, who has lived in Corona for the last 17 years, is among them.

The 40-year-old had been working for a Midtown catering company for nine years when the number of COVID-19 cases began mounting in mid-March and employees were sent home.

“We thought it was going to be quick,” he told THE CITY in Spanish. “But weeks became months and then nothing. The little we had saved was quickly gone.”

‘Crashing Against a Wall’

The owner of the catering company contracted COVID-19 and died, Valentín said. Not only did that mean roughly 100 employees were out of a job, but 100 families would be affected, he added.

Valentín, who did not want THE CITY to use his full name because of his immigration status, and his wife also got sick — leaving their two children, ages 10 and 13, worried about their parents.

Valentín typically earned around $1,600 a week at the catering company, enough to pay $2,600 monthly rent and household expenses.

“We had some savings and we kept telling ourselves we were going to be OK. But then a month passed, two months, three months and we kept saying, ‘What are we going to do?’ I went looking for work but there wasn’t any,” he said.

He hasn’t been able to pay the rent in recent months. 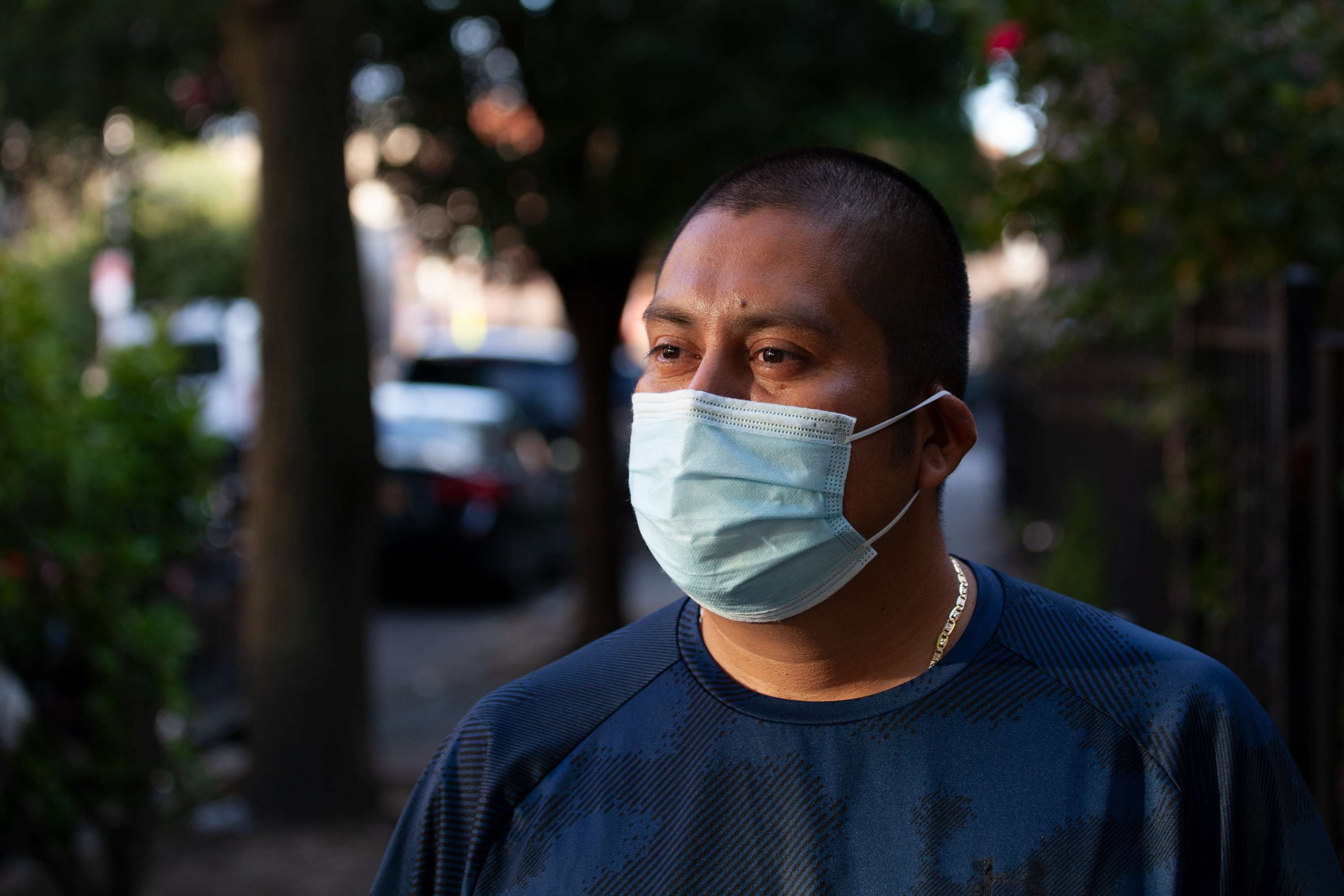 A June report from the Center for Urban Future found that half of New York’s working-class immigrants lost their jobs due to the pandemic. As of July, Queens had a 20.5% unemployment rate, slightly above New York City’s as a whole at 20%.

Valentín applied for a relief program offered by the de Blasio administration, which teamed with Open Society Foundations to provide a total of $20 million to 20,000 immigrant New Yorkers ineligible for other forms of government assistance, but wasn’t selected.

“We feel frustrated in our government. I know we’re immigrants, but we still try to do things right,” he said. “I’ve been paying taxes for more than 10 years. At the start of this I thought maybe I qualify for government aid or something.

“But unfortunately it was like crashing against a wall. There’s nothing for us.”

Valentín turned to food pantries and distribution centers for help.

“It felt uncomfortable to go to a food pantry because we had never asked for help before and weren’t used to it. But sometimes situations force us to do things that we never thought we’d do,” he said.

Valentín was able to get a temporary job for a few weeks through the World Central Kitchen, a national nonprofit organization started by famed chef José Andrés that provides food in areas where natural disasters hit.

On a sunny day in late August, a line of several hundred people snaked down Junction Boulevard outside the office of Assemblymember Catalina Cruz (D-Queens) and along several side streets as people waited for fresh produce and prepared meals from World Central Kitchen being distributed there.

World Central Kitchen has launched a program teaming with local restaurants to pay them to provide food for the people in the community that is similar to the things they would normally eat, said Fiona Donovan, the relief operations lead at the organization.

The group is currently working with 22 restaurants in Queens, including Mama Catalina, a Dominican eatery in Corona.

Mama Catalina closed its doors on March 20 and opened again mid-May, said Jose Luis Ortiz, one of the owners. 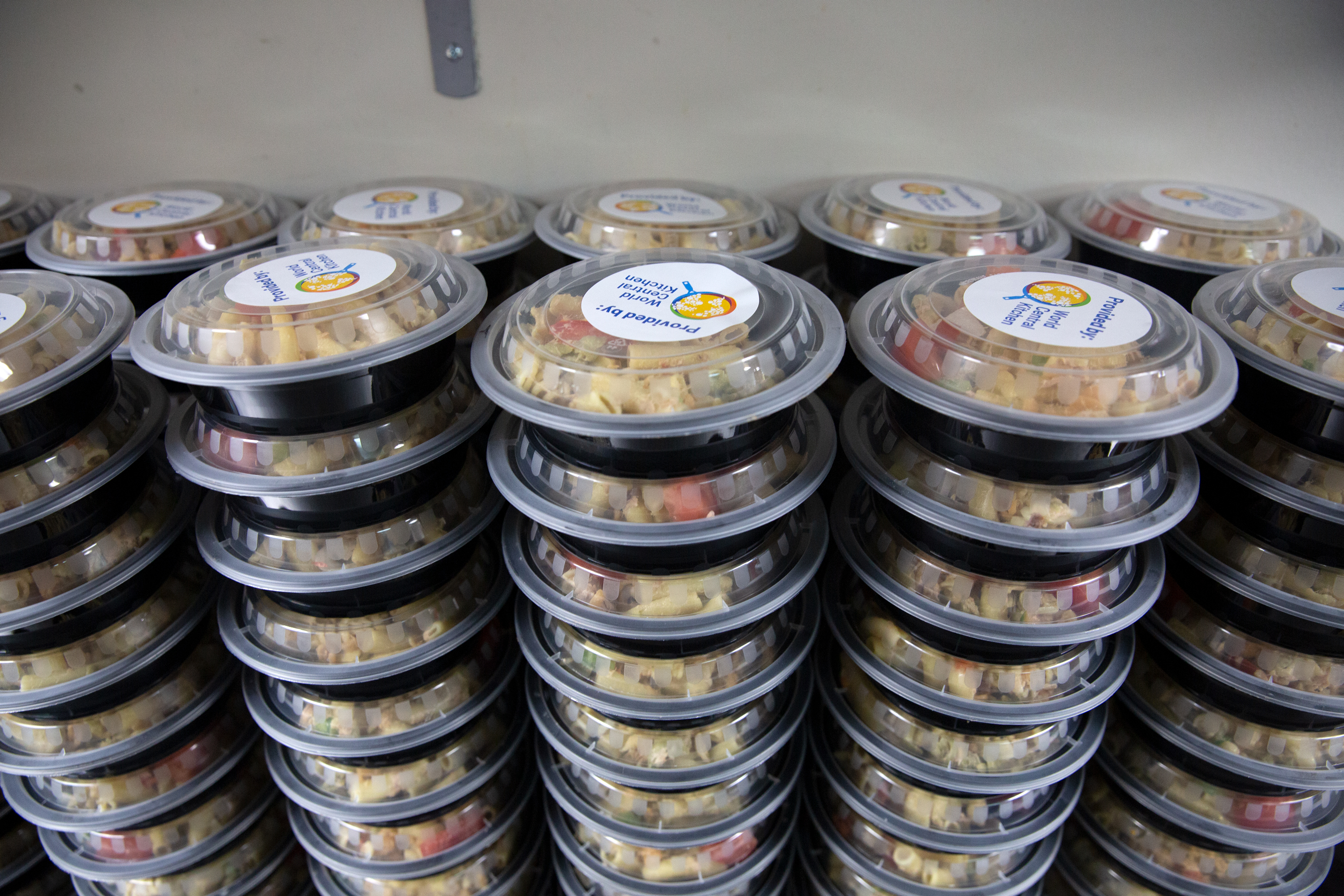 Ben Fractenberg/THE CITY The owners of Mama Catalina in Corona have been giving away 3,000 meals a week for families hit by the economic downturn. Sept. 1, 2020.

“Things were ugly. The situation was bad. People were panicked. The first few weeks after opening were hard and slowly people started coming back,” Ortiz said. “A lot of people thought we closed because someone got sick, but we closed as a precaution. My wife is the chef. We didn’t want to run the risk of anyone getting sick.”

Sales hover around 60% of pre-lockdown numbers, Ortiz told THE CITY.

Rent for the location is $4,600 a month and with less money coming through the door, the restaurant owed more than $20,000 to the landlord. Ortiz, said he’s been able to pay off the bill in increments, thanks to the work he does with World Central Kitchen, which gives restaurants between $7 and $10 per meal made.

“We prepared 3,000 lunches a week. That has been our salvation. I don’t know how we would have survived without that,” said Ortiz, who lives in Rosedale and has owned the restaurant for five years.

“I was able to pay [rent] thanks to that assistance, but if I couldn’t? There are many who can’t pay,” he added.

And throughout Corona, he noted, the lines at food distribution centers have not abated.

“There’s a lot of need in Corona. We also started giving away meals on 108th [Street] and you could see the poverty and necessity,” Ortiz said. “I’m not saying it because our restaurant provides food, but this is a resource that shouldn’t be taken away until things go back to normal.”

A Right to ‘a Plate of Food’

Agustin Alatorre, 49, stood in line for food distribution outside of Cruz’s office, among a mix of mostly Latino and Asian women and their families waiting in the sun for their cardboard box filled with produce and bags with prepared meals.

Alatorre carries around a black plastic bag with Gold Bond powder to prevent him from chafing in the heat, which he says could lead to wounds. He was wearing a plastic hospital bracelet and a baseball cap to shield his head because he had staples from a head wound removed that morning.

Despite being a legal permanent resident, Alatorre said he can’t access government aid because he hasn’t filed taxes in recent years and is worried that if he asks for assistance, it would be used against him.

He doesn’t have much use for the box of fresh produce — which on that day contained apples, zucchini, tomatoes and onions — since he doesn’t have a kitchen in which to prepare the food. Instead, he gives the items to a local restaurant or to a former neighbor. In exchange, they make him a meal, Alatorre said.

He carries a jalapeno in his pocket to dice up and sprinkle on food whenever it’s bland, a nod to his Mexican roots, Alatorre said.

He received four prepared meals in his food package, two types of pasta dishes that came in plastic containers, but will only keep one for himself. The rest he saves for the other homeless people he runs into at night.

“Everyone has the right to a plate of food,” Alatorre said in his native Spanish.

Mercedes, a street vendor who sells Mexican food in Corona, said community members help each other out when other forms of assistance are out of reach.

“When we were in lockdown, there were many who didn’t have food or weren’t prepared for the shutdown,” said Mercedes, who did not want to have her full name published because she fears she’ll be targeted because she’s undocumented. “People couldn’t leave their homes because they were sick or too scared to go shopping.

“We would keep in touch either through calls or video to keep their spirits up for the people who got sick,” the 41-year-old mother of two added. “We helped however we could — with prayers, food, words of encouragement, anything.”

But with less disposable income, people aren’t going out to eat as much or spending at the same rate as previously.

Mercedes, who has lived and worked in Corona for the last seven years, earned roughly $500 a week selling in Corona Plaza before the pandemic began. Now she’s lucky if she makes more than $100.

Paying her roughly $2,000 in rent and bills has been a struggle, Mercedes said, but she notes she’s only a month behind.

The only assistance she’s received was from the advocacy group the Street Vendor Project, which has distributed $300 gift cards and food to vendors, thanks to a GoFundMe the organization set up in March.

The Street Vendor Project is also one of 30 organizations that’s distributing the Open Society Foundations’ funding.

“It’s a great step, but it reached 3% of New York City residents who are undocumented,” said Carina Kaufman-Gutierrez, deputy director of the Street Vendor Project.

People who lost their jobs are turning to street selling to try and make ends meet, causing a surge in vendors in Corona, Kaufman-Gutierrez said.

For Mercedes, the pandemic has changed the neighborhood in unexpected ways.

“When you’re out selling you sometimes run into people you haven’t seen in a while,” she said.

“People’s faces changed. You can see their sadness and you start asking and they’ll tell you they lost a family member or being evicted. It’s upsetting. You feel impotent because as Latinos we’re used to uplifting and helping each other,” Mercedes added.

This story was originally published by THE CITY, an independent, nonprofit news organization dedicated to hard-hitting reporting that serves the people of New York.

Best thing the president did was start building the wall. Get rid of this extra baggage.

The man paying $2600 for a 2-bedroom in Corona seems to be getting seriously price-gauged! Also, how on earth does one earn $1600 a week at a catering company unless they’re the head of it? I’m assuming this was a typo.