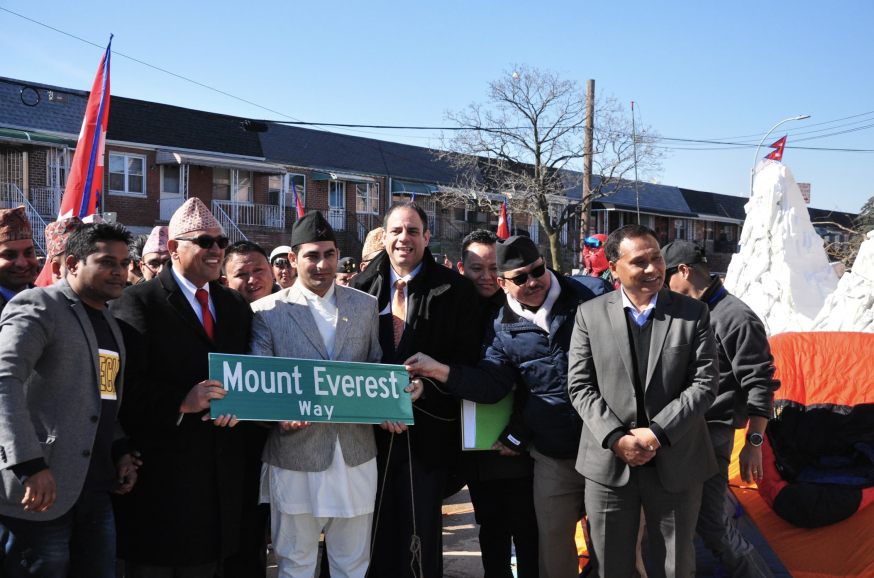 An East Elmhurst street was co-named “Mount Everest Way” Saturday, as local leaders paid tribute to the growing contribution of the Nepali-American community.

Council Member Costa Constantinides held a ceremony to unveil the new street name, which went up on the corner of 75th Street and 31st Avenue.

“Queens is a better place thanks to the generations of hardworking, devoted, and giving members of the Nepali community,” Constantinides said. “Mount Everest is a fitting metaphor for how strong the Nepalese have been throughout the diaspora, especially here in Jackson Heights.”

There are more than 10,000 Nepali natives living in New York City, according to recent census data. However, Constantinides said that the number is likely twice that, with a high concentration living in the greater Jackson Heights area. The Nepali-American population has grown since a civil war broke out in the country in the 1990s and again in the mid 2000s.

Constantinides said that he has taken steps to help the Nepali community since he took office in 2014. He said that he was able to convince the New York State Department of Motor Vehicles to provide applications for learners’ permits and other certifications in Nepalese. He said he also coordinated with Elmhurst Hospital to provide Nepali-Americans with translators.

The co-naming, which was approved by the City Council in December, is part of a city-wide initiative to rename public places and streets in recognition of influential groups or leaders.

Constantinides was joined Saturday by the Nepali Ambassador to the United States; several other Nepali officials; and hundreds of Nepali residents.

No one wants to acknowledge that Jackson Heights/East Elmhurst/Corona went down the drain in terms of cleanliness, safety, and population density once the Latinos started coming here (legally or not).

Queens really has suffered in the last two decades with the changing demographics.

Thanks for confirming the racist Trumpeter stereotype. There’s no denying America went down the drain in terms of bigotry once the Trumpeters started marching with tiki torches.

I’m a brown citizen born in Queens to LEGAL immigrants who came here in the early 80s.

There’s nothing racist about dealing in facts. Queens is not the same today as it was 10-20 years ago and it’s because of the Latinos living in overcrowded conditions and not caring about the cleanliness and appearance of their surroundings.

Neighborhoods reflect the people that live in them…sorry the truth offends you.

Those immigrants were a different breed of people. They came to this country, were proud to call themselves Americans and worked their fingers to the bone building NYC. They were too proud to accept handouts and they kept their community nice.. look at Jackson Heights/East Elmhurst now.. definitely not the same.. not as clean, safe or classy as it used to be way back when. I totally agree.. where is the recognition?