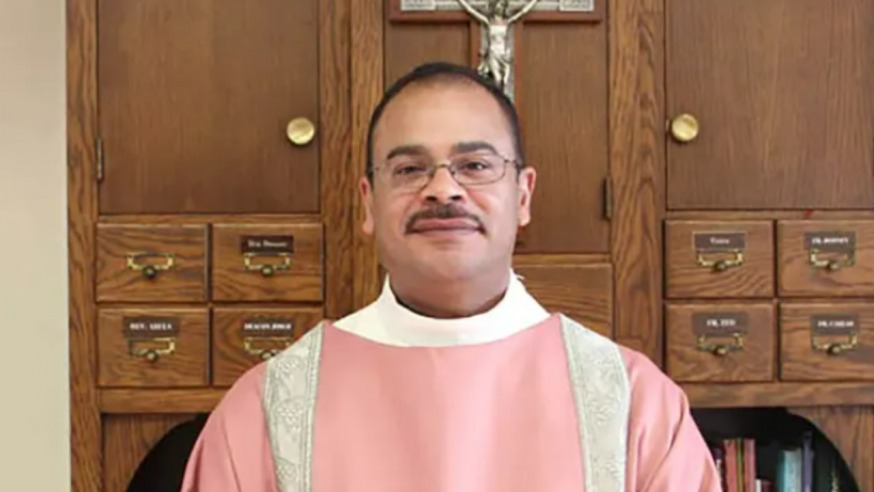 A disgraced former Catholic deacon from Maspeth – who was convicted in state court last year of attempting to hook up with a teenage boy for sex purposes – has pleaded guilty to federal charges of having sexual encounters with three teenage boys.

Rogelio Vega — who previously served as a deacon at Saint Sebastian Church in Woodside — pleaded guilty Friday in Brooklyn Federal court to three counts of enticing a child to engage in sexual conduct.

According to the charges, Vega, 52, met the boys separately on multiple occasions between 2015 and January 2021 – where he took part in sex acts with them. The victims were aged between 14 and 16 at the time. It is unclear where the sexual encounters took place.

The ex-deacon targeted the boys using the Kik messaging app — which is used primarily by teens and young adults – and the gay hook-up app Grindr where he expressed his interest in “young guys.”

Vega, who is married with four kids, then met the boys for sexual encounters in his car or at motels, according to prosecutors.

Vega’s latest crimes came to light after cops seized his phone during a January 2021 sting operation where the then-deacon was trying to lure a 14-year-old boy to his car for sex acts. The “teen” was actually an undercover cop and police subsequently searched Vega’s phone to find sexually explicit messages between him and the three boys.

He pleaded guilty to the state case involving the 14-year-old boy in October and was sentenced to 10 years probation and listed on the sex offender registry. The federal case broadened the investigation to cover additional victims. Vega was arrested on the federal charges on the same day he pleaded guilty to the state case, according to police sources. He has been in custody since then, police sources told the Queens Post.

According to federal court documents, Vega met one of the victims, a 16-year-old boy, approximately five to 10 times for sexual activity.

The encounters were initiated after Vega sent a series of sexually explicit messages to the boy via Kik — between April 2019 and December 2020 — where he expressed his clear interest in “young guys.” The victim also sent Vega around 20 sexually explicit images or videos.

The second victim in the federal case, a 14-year-old boy, told police he met Vega three or four times inside the deacon’s car — where they engaged in sexual activity.

The encounters occurred after Vega messaged the boy in July 2020 via Grindr, expressed his interest in “young guys,” and asked the victim his age.

The boy responded “14 but love older guys,” to which Vega wrote, “nice.”

The third victim in the federal case was 15 years old when Vega targeted him in 2015, prosecutors said. The victim told law enforcement that he met Vega three times when they engaged in sexual activity.

The abuse occurred despite the boy stating his age on his Grindr profile and telling Vega via the app that he was still attending school.

In one series of exchanges on the app, Vega told the boy to “bring condoms and something where we can lay down on,” and “don’t tell anyone about this.” Vega later texted the boy, “did you like it today?”

“Today’s guilty plea holds him responsible for his actions and prevents him from causing any additional harm,” Sewell said. “And he will forever be branded as a predator who used the internet to prey on underage victims for his own sexual gratification.”

Vega faces a statutory minimum sentence of 10 years in prison and a maximum of life imprisonment.

“Immediately upon the arrest of Rogelio Vega in January 2021, the Diocese of Brooklyn removed him from ministry, which prohibited him from ministering as a Deacon and performing liturgical duties.”

“Following today’s admission of guilt in federal court, the Diocese of Brooklyn has reaffirmed that Mr. Vega is not recognized as a deacon and the process has begun to have him permanently removed from ministry.”

“We pray for the three victims in this case. May today’s resolution be a first step toward healing.”